Everyone has probably heard of a Net Promoter Score (NPS), the popular measure of customer loyalty. But many people who know it’s important still aren’t sure what it really means, how it is calculated, or what is considered a good or bad score.

What is Net Promoter Score?

Net Promoter Score is a way for companies to measure customer loyalty. The method for measuring a company’s NPS is actually pretty simple. In fact, only a single question is asked. On a scale of zero to ten, how likely are you to recommend product/service X to a friend? It seems really easy.

You may have noticed, however, that when companies report their NPS, they use numbers like 40 or -10. We’re very proud of our +60 score, and wanted to dive down into how the original ratings on a scale of zero to ten get calculated into an NPS. So, what does that rating really mean?

First, a little background will be helpful. Once customers rate how likely they would be to recommend a product or service, they get divided into three groups:

Detractors are those respondents who answered with an NPS rating anywhere from zero to six. They are the dissatisfied customers who are complaining on Facebook. Anyone giving an answer of seven or eight is in the passive category. These people aren’t unhappy, but they aren’t happy either. If they see a similar product with competitive offerings, they are likely to switch providers.

It is only those who rated their likelihood of recommendation as a nine or a ten who are considered promoters. This may seem like a skewed way of dividing people, but if you think about it the divisions make sense. If you asked a friend how they would rate a restaurant and they gave it a six, for example, chances are you are never going to try that restaurant. Even a seven or eight likely wouldn’t get you in the door. When we look to others for suggestions, we want their nines and tens.

What is a Good Net Promoter Score?

What is considered a good score versus a bad score depends a lot on what kind of company you’re talking about. The average NPS for a grocery store is 36, while the average NPS for a cable provider is (unsurprisingly) three. Depending on the sector you’re considering, an NPS of 20 could be great, or it could be lousy. It’s important to compare apples to apples when looking at NPS.

How Are We Doing? 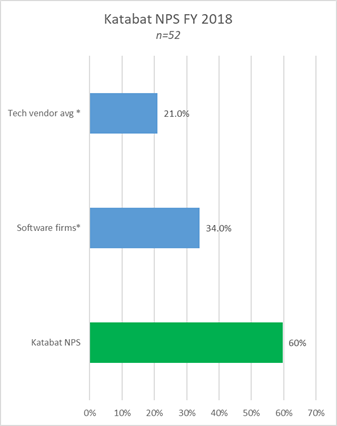 At Katabat, we look at scores of other tech vendors, software firms, and SaaS companies to determine how we measure up when it comes to customer loyalty. The average NPS of tech providers is 21. For software firms the average is higher at 34. B2B SaaS companies have the highest average NPS at 40. It’s nice to be operating in an industry where customers end up satisfied.

Our +60 NPS would be excellent in any sector. This score means that when asked how likely they would be to recommend Katabat to a friend, almost two thirds of our customers gave an answer of nine or ten. GrowthScore, a provider of NPS software, recently reported that only the best B2B SaaS providers have an NPS above 55.

Do you share our passion for converting neutral customers into enthusiastic promoters? Let’s talk about how great customer experiences can boost your revenue at info@katabat.com.

Katabat Powers the Future of Collections

“Payment deferrals were a lifeline for millions during Covid. What happens when those end?” That’s the headline from a recent...

Are you interested in learning more about the Katabat platform? Schedule a demo today.